Designing computer applications for education might be called cognitive
engineering, for its objective is to shape children’s minds. Such a goal must
carry with it a commitment to cognitive science, the study of how knowledge
functions and changes in the mind. In light of the profound influence of
computers in the schools, designing educational applications without such a
commitment would be irresponsible.

I believe that Jean Piaget, the Swiss student of knowledge, formulated the
general solution to the problem of how intelligence develops. Although the
field of cognitive science has advanced beyond Piaget’s innovative theories by
revising and extending them, his insights into the nature of learning continue
to influence teaching methods. The union of computer microworlds and Piagetian
theory is the subject of this article.

Central to the work of Piaget is constructivism, the view that the mind
incorporates a natural growth of knowledge and that the mind’s structure and
organization are shaped by interactions among the mind’s parts. In The
Science of Education and the Psychology of the Child (Viking Press), Piaget
challenges educators to answer two questions: How does instruction affect what
is in the mind ? and What remains in the mind from the process of instruction
long after the time of instruction has passed ? In the same work, Piaget
disputes both the effectiveness and the ethical correctness of many of the
practices of modern education:

“If we desire to form individuals capable of inventive thought and of helping
the society of tomorrow to achieve progress, then it is clear that an education
which is an active discovery of reality is superior to one that consists merely
in providing the young with ready-made wills to will with and ready-made truths
to know with. “

The Dilemma of Instruction

Given Piaget’s view that learning is a primary, natural function of the
healthy mind, we might consider instruction in any narrow sense unnecessary.
Children (and older students of life as well) learn the lessons of the world,
effectively if not cheerfully, because reality is the medium through which
important objectives are reached. Nevertheless, in certain situations children
often rebel against the lessons society says they must learn. Thus the
educator’s ideal of inspiring and nurturing the love of learning frequently is
reduced to motivating indifferent or reluctant students to learn what full
functioning in our society requires.

Teachers face a dilemma when they try to move children to do school-work that
is not intrinsically interesting. Children must be induced to undertake the
work either by promise of reward or threat of punishment, and in neither case
do they focus on the material to be learned. In this sense the work is
construed as a bad thing, an obstacle blocking the way to reward or a reason
for punishment. Kurt Lewin explores this dilemma in The Psychological
Situations of Reward and Punishment. (in A Dynamic Theory of Personality, McGraw-Hill, 1935). The
ideas of Piaget and Lewin have led me to state the central problem of education
thus: “How can we instruct while respecting the self-constructive character of
mind ?”

In Mindstorms: Children, Computers, and Powerful Ideas, (Basic Books, 1980) Seymour Papert proposes computer-based
microworlds as a general solution to the problem of motivation. One argument
for Papert’s proposal runs as follows: learning is often a gradual process of
familiarization, of stumbling into puzzlements, and resolving them by proposing
and testing simple hypotheses in which new problems resemble others already
understood. Microworlds are in essence “task domains” or “problem spaces”
designed for virtual, streamlined experience. These worlds encompass objects
and processes that we can get to know and understand. The appropriation of the
knowledge embodied in those experiences is made possible because the microworld
does not focus on “problems” to be done but on “neat phenomena”–phenomena that
are inherently interesting to observe and interact with.

With neat phenomena, the challenge to the educator is to formulate so clear a
presentation of their elements that even a child can grasp their essence. A
well-designed computer microworld embodies the simplest model that an expert
can imagine as an acceptable entry point to richer knowledge. If a microworld
lacks neat phenomena, it provides no accessible power to justify the child’s
involvement. We can hardly expect children to learn from such experiences until
they are personally engaged in other tasks that make the specific knowledge
worthwhile as a tool for achieving some objective. This amounts to an
appropriate shifting of accountability from students (who have always been
criticized for not liking what they must learn) to teachers, those who believe
that their values and ideas are worth perpetuating. 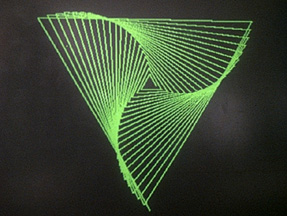 Neat Phenomena can be carried out of the computing environment to enrich individuals’ lives in direct ways, as suggested by these two works of art, both made by Rob. The sign for the New York Logo Center reproduced a six-fold multiple polyspiral with nails and string on the door for a kitchen cabinet not needed in Cedar Hall (the artifact is now, I believe, in the offices of the Logo Foundation in New York City). With the experience and understanding of emerging designs in computers, Rob was able to be interested in the more “naturalistic” riding warrior design which he made under my commission.