The BEACH microworld is a collection of procedures. BEACH creates a scene on the video display. Other words (procedures) create objects (sprite-carried shapes) and manipulate them. The purpose is to create and control objects using one word at a time.

To begin, type BEACH and press return; a scene will appear on the display. 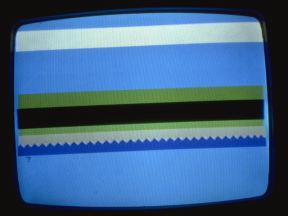 Select a name from the word list below. When you key the name, a picture of that object will appear on the screen. This newly created object is the CURRENT OBJECT. The word SUN has been typed on the scene below. 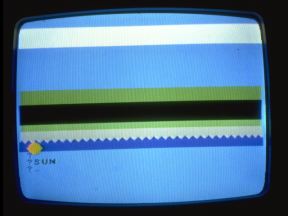 Select any desired word from the ACTION word list below; keying that word will change the state of the current object. For example, keying UP will make the object move higher on the display as in the scene below. 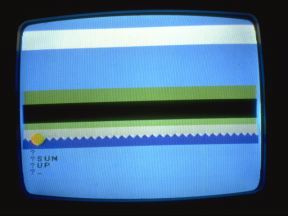 The CURRENT OBJECT will respond to any number and variety of state changing commands. In the scene below, the SUN has moved UP nine times. 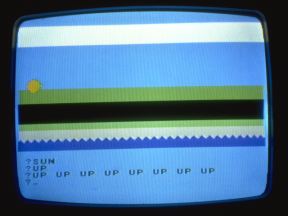 The scene below is typical of those that Peggy made when she was three and four years old. You will see that she has used the names of several different objects. She has also used the name of the obect SUN several times and then decided to keep them distinct by changing the color of the object. To change colors, you just type PAINT followed by a space and color name, such as RED. To make objects move and continue moving, type a motion word from the Action word list below. 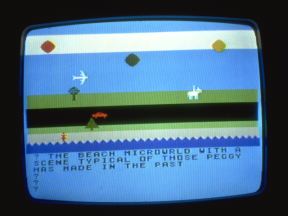 To get some previously created object to respond to commands after you have created a different object, type the following: TELL :name (for example, TELL :SUN).

Below is a demonstration display of the main objects of the BEACH world. This display was created by typing two words: BEACH SCENE 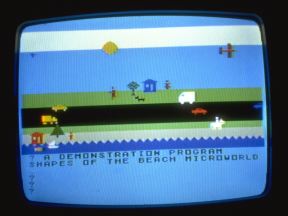 BEACH is a microworld for pre-readers. A young child can USE alphabetic words to create and control objects, and from their use can learn what they mean in this limited context. If there are older people around, they can make designs to represent new objects (with the shape editor) and write procedures to create and manipulate those objects. Pre-readers will have a novel experience of words, one where the alphabetic "written" word is a set of directions for keying a computer command. They will be using words to control the computer. This use of words contrasts with words in text, whose meanings are interpersonal communication puzzles, to be decoded and then associated with private memories (as in reading).

Young children will learn to read these words as they type them on the computer for controlling the BEACH microworld. They will be learning to read and write at the same time. This experience with words working to do their bidding will help children understand by contrast the less obvious and more complex use of words in printed materials.