In a time when Freud’s suspicion of human motives has become the background
against which all actions are seen, when we recognize, as Auden has it, that
‘the desires of the heart are as crooked as corkscrews’, any approach to
knowledge which smacks of introspection or engaged observation is suspect as
well. Yet Langer argues convincingly [in Chapter 2 of Mind, Johns Hopkins Press] that
only through exploring the engagement of observer and psychological subject
will we ever come to confront those phenomena which are central to an
appreciation of learning in the language capable mind.

This collection of studies focuses on understanding natural learning
though application of the case method. The four studies all focus on the
number-related learning of my son, Robby, during his sixth and seventh years.
The other thread that binds them together is the issue of rendering more
accessible and dependable those kinds of insights that can only come about
through the articulate testimony of the psychological subject. The collections
of ideas and observations move, in their attempt to deal with the issue of
learning, from introspection to a balanced mixture of mechanically recorded
experiment and naturalistic observation.

The inspiration for beginning this recording was the observation by a fellow
researcher [L.Miller, who studied with Cellerier in Geneva] that a major technique being
explored by Genevan psychologists involved the following steps:

At the laboratory where the following studies were undertaken, the Children’s
Learning Lab of the MIT Logo Group (then a part of the Artificial Intelligence
Laboratory), I began to ask how we could apply and extend techniques for
recording and analyzing behavior for use in the study of natural learning.

Generally, people’s understandings of various problems depend on their
own experience more than on general principles, but experience is
characteristically particular as to content and episodic in structure.
Introspection is vulnerable to criticism as a review of atypical experiences
where the details and significance of experiences are modified to conform to
the individual’s preconceptions. Capturing a record of one’s own behavior for
later analysis might permit the judicious mixture of reproducible records of
experience with a richer appreciation of the possible meanings of the recorded
behavior. Such an attempt at constrained, analytic introspection begins this
collection in Emerging Forms in Turtle Geometry.

Obviously enough, introspection alone is inadequate for studies of
instruction. The extension of constrained, analytic reflection to situations
where ideas are transferred from one mind to another is explored in Three
Encounters with Number. As an engaged experimenter, I brought to this study
the possibility of understanding the behavior from the inside; further, as the
father of the subject, I have a long familiarity with him which helps
significantly in interpreting what he meant by what he said and did.

Given that our focus is on natural learning, in the sense of the collection of
processes which create common-sense knowledge, it proved essential to move
beyond the limits of experimenter-directed activities to explore how the
initiative of the child and the social context reveal the character of natural
learning in its interactions with people and problems. Sketches of Natural
Learning is a selection of observations drawn from a more extensive but sparse
collection of experimental protocols on various themes taken up with my son
during his seventh year. Finally, Extending a Powerful Idea explores how theory
construction derives from pre-existing heuristics for exploring and creating
interesting new problems .

Relationship to Another Study

As a study of one child’s learning in a computer rich milieu, this
collection is a companion piece to Computer Experience and Cognitive
Development, the more intensive study and analysis of my daughter’s learning in
her sixth year. 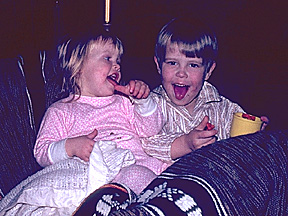 Rob and Miriam, two peas in a pod.

Both studies took place in the same laboratory, at the same
time. They both are, in fact, different aspects of the same effort to explore
the processes underlying the development of learned, every-day knowledge.