This chapter is an introspective study, focused on the development of a simple but non-trivial idea, proceeding through an analysis of and reflection upon a trace of my own thought. It is a noting of the appearance of ideas, their sources, and interconnections. This retrospective approach has been possible because my habit of long standing has been to keep an intellectual journal.

The generative theme of this case study has been the idea of emergence. In a lecture focused on the history of Artificial Intelligence, Marvin Minsky asked whether mental coherence in the human mind is a centrally generated phenomenon or an incidental artifact, emergent from the interaction of parts with clustering procedures. He remarked further that a rich theory of the kinds of emergence that can occur in the human mind is needed and that it is more likely to come from computer-related sciences than from mathematics; for the former confront the issue of complex interaction immediately, while the latter has failed to develop any profound method for dealing with the relation of wholes and parts. At that time, I was sure I didn’t know what Marvin meant; now I am less certain.

A Building Sense of the Issue’s Importance

From my journal’s notes of the ensuing month touching on the issue of emergence, most entries related to language and in two aspects which are adequately characterized by the terms ontogenetic and phylogenetic. The latter motif springs from another observation of Minsky’s, that “evolutionary genesis” must be addressed by any theory which purports to explain the human mind. This observation led to my re-reading various works of Susanne Langer, which will be noted in more detail later. The former aspect, the ontogenesis of linguistic forms, takes its keynote from the two observations that what is needed is an explanation of structure as an emergent in linguistic development and that mathematics has failed to deal adequately with the problems of parts and wholes and their interactions. I note these observations not to raise arguments but to reflect my building sense of the importance of emergent processes and phenomena and consequently, a developing motivation to confront and explore such phenomena wherever they might appear accessible.

A Concrete Embodiment of the Problem

More than a month after the planting of this seed in my mind, the process by which it became embodied began with a computer session at the MIT Logo project. A colleague in a teacher’s group asked me to discuss her work on the computer; she wanted someone to talk to so that she could externalize her ideas, tape record them, and subsequently analyze their development. At the end of that session, we spent some time developing a procedure to draw some of the designs shown in Figure 1. The turtle’s movement from one location to another with the pen down draws a line on the video display. 1 The Logo commands to the turtle have one or no operands. The no operand commands are ‘penup’ and ‘pendown.’ The heading commands are ‘right N’ and ‘left N,’ where N is the number of degrees through which the turtle should turn. The linear movement commands are ‘forward N’ and ‘back N,’ where N is now a unit of linear measure (400 of these units measure the width and height of the space within which the turtle moves). At that point, I saw the “Squiral” as manifesting emergence in a form investigatable in our laboratory environment. This minor insight led to the ruminations in my journal of the following morning, quoted here in full in the following:

For angles near to but not equal to the closed form’s angle, emerging spirals form some sort of envelope of the shrinking figure. Note:
1 for zero decrement, the emergent is a circle.
2 for angles greater than the closed form angle, the emergent spiral goes clockwise tighter.
3 if decrement is too big, the illusion of emergence disappears.

The illusion seems to depend on —
a near contiguity of corners in the next ring to the side in any prior ring.
b only a slight precession of the basal form….

Using a Superprocedure for Controlled Exploration

When the general issue of the cause of this illusion of emergent form had arisen, I realized it could be investigated simply by using a higher level procedure to manipulate the DESIGN procedure. The specific question I posed for myself was about the nature of the transformation of a three armed spiral (seen with angles near 120 degrees). How did the change in arms and the directional sense occur? Was there some sort of flipping phenomenon in the central region? Or degeneration to an amorphous mess? I had no trustworthy intuition on this point, but the computer could come to my aid by displaying those designs at a level of detail which would permit me to see what I could not imagine.

A Superprocedure for Exploring Transformations: a failure

I thought the best way to see the transformation from three to four spiral arms would be through an executive procedure which would step down from 120 to 90 degrees, displaying for each angle the appropriate design. Some of the terminals on the Logo system at that time permitted the displaying of “snapshots” of drawings made by procedures. I intended my executive procedure to display in rapid succession the snapshots generated by a second super-ordinate procedure. When I tested these procedures, I failed of my objective because the software support for the snapshot facility was limited with respect to how many drawing lines could be stored at one time. This impasse exhausted the time and effort I was willing to spend on this idea so I dropped it.

I worried about Marvin’s dictum that one should be concerned with “evolutionary genesis”. I vaguely recalled having read in Susanne Langer’s Philosophy in a New Key some speculations about the genesis of language. I re-read her recounting of the ‘Festal Origins’ hypothesis. That book was written in the early forties. I turned to her more recent work Mind: An Essay on Feeling, looking there for new ideas she or others had on the issue of how language came into being — and read more of that book than her references to that single issue. How does such a divagation connect with the geometric designs of our alternate theme?

We had run into a technical impasse; here is how it was resolved. Explaining to a visitor at the lab that one of the values of a computer system lies in an expansion of one’s intuition, I showed him my colleague’s DESIGN procedure. Explaining the use of XORDOWN, a command available on a second terminal type attached to the Logo system, I stumbled across two facts that I had already known: first, designs on these second terminal types (TV raster displays with bit-map representation) are not limited in complexity by being restricted to a small list of lines as were the other terminals; secondly, the drawing speed of the TV terminal types could be fast enough to permit my program for exploring emergence to carry on — if the drawings were made with the turtle ‘hidden’. Once this realization was achieved, I coded an executive procedure to manipulate the DESIGN procedure.

The Resolution in Detail

Reading over the next few days in Langer’s book Mind, I encountered the drawing reproduced as Figure 2a, her example of an emergent form dominating its component figures. My reaction: “I can do that easily, and doing so would add a second level of emergent form to the exploratory procedure I am developing.” I encoded a new executive procedure, SPADES, below. [2]

The “Spades” procedure is rigid, drawing six figures in emulation of Langer’s design regardless of how ill they might fit together when the component shapes are not triangles. In a quickly made modification, I composed a final version of a top-level control procedure, renamed MPOLYSPI (multiple polygonal spiral) and cleaned up for public use. This ‘cleaning up’ involved an analysis of what variables might possibly be significant in executing the designs and permitting their manipulation at the top-level of control. With different settings of the variable values, such various designs as those of Figure 3 are generated. This brought the development to a natural end. 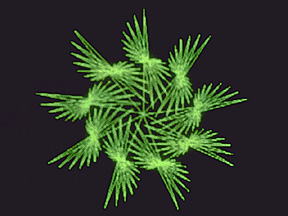 After being sensitized to the importance of the interplay of emergence and control, the pattern in the development of this procedure we observe is as follows:

One can name the first step a concrete inception, the second a generalization, and the last a consolidation. Step number three has no name, yet it appears to be the most significant step in the development: first, because it pre-supposes selection of some range of variables as possibly the most interesting dimensions in the lower level structures; secondly, because it is the essential step in the development of structure. Call it ELEVATION. Notice that elevation is a concrete construction based on a survey of the generality of the lower level structures. It is not a mystery in any sense at all.

How General is the Observed Process?

One may fairly ask whether this pattern is idiosyncratic or whether it may be characteristic of programmers. The following observation by professional mathematicians, writing under the name of Nicholas Bourbaki, argues that the process of elevation is more general. I believe it may be a significant component in what Piaget called reflexive abstraction. [3]

“A mathematician who tries to carry out a proof thinks of a well-defined mathematical object, which he is studying just at this moment. If he now believes that he has found a proof, he notices then, as he carefully examines all the sequences of inference, that only very few of the special properties in the object at issue have really played any significant role in the proof. It is consequently possible to carry out the same proof also for other objects possessing only those properties which had to be used. Here lies the simple idea of the axiomatic method: instead of explaining which objects should be examined, one has to specify only the properties of the objects which are to be used. These properties are placed as axioms at the start. It is no longer necessary to explain what the objects that should be studied really are…. ”
N. Bourbaki [4]

General Conclusions about the genesis of MPOLYSPI

This mildly creative innovation was guided by an insistent concern where both the personal and environmental means were available to construct a theory-in-action for exploring the issue at the center of that concern. The idea begins with a concrete embodiment, the program SPADES. Once this concrete end product is generalized, the former ‘end’ is available as a ‘means’, a procedural tool useful to a super-ordinate level of control. [5 ] The elevation of control creates structure. We conclude with the designs of Figure 3, seeing there a flowering of effects from creation of the new level of structure.
Could such ‘elevation of control’ be implicated in the growth of cognitive structure, generally ? This issue is explored in subsequent work reported here and otherwheres. [6]