Robby and Miriam each receive a nominal ‘allowance’ weekly,
regardless of whether they’ve been ‘good’ or ‘bad’ or done what we
parents have wanted them to. They know it is computed by multiplica-
tion: for each child the ‘allowance’ is 5¢/year times the child’s age.
Thus Miriam recently began receiving 30¢/week. Robby receives 35¢ and
will soon receive 40¢. Such is a small amount of money, enough to buy
one stick of chewing gum a day with only a little left over.

Upon our moving to Boston, Robby took over the chore of mopping
the floors, the frequent necessity of which derives from Miriam’s dust
allergy. Because I consider it my responsibility, and not one I can
manage easily and directly, I pay Robby to do this work for me. He
saves his money andy buys models of boats when his hoard is large enough.
Because Miriam cannot perform any similar work, this difference has
become another element of sibling competition and has intensified the
children’s general interest in money as an instrument of power.

After an early spring trip to Connecticut (which included
travel on the toll-collecting Connecticut Turnpike), I found Robby had
set up a toll booth at the entrance to the secretaries’ office at Logo.
(At one point he claimed Greg owed him $18.) I objected to that game
and told Robby to play it no more at the lab.

This Friday Gretchen brought home a stack of cut yellow paper,
the pieces being about 3×8″. When he first saw them, Robby referred
to the papers as ‘tickets.’ In fact, they are about the same size and
shape as the parking tickets I have collected with distressing regu-
larity at MIT. With this minimal suggestion of tickets (and paying
fines), Robby conceived and both children executed a plan to establish
toll booths in our carriage house, Miriam at the entrance to our general
living area and Robby at the entrance to our bathroom.

This seemingly harmless game was a good answer to the recurrent
question of what to do on a rainy day. The game was one of the chil-
dren’s invention, a simultaneous practicing at being grown up and an
expression of their concerns and ideas. It had the ultimate value, the
sine qua non, of absorbing their time and energies in a direction-free
project. The children made signs for the toll booth, tally sheets of
accrued obligations, and collections (typed) of commutation tickets
(examples may be seen in Addendum 31-1).

This toll-collection project finally spanned several days.
Aside from increasing the general clutter, the only flaw – and this a
fatal one – was that the children confounded the toll collection ‘debt’
with what we considered real obligations, i.e. the providing of their
weekly allowances and the daily snack allotment (50¢) the children
receive when they come to work with me at Logo. Robby began computa-
tions such as this: if I save 2 fifty centses, mop Miriam’s bedroom
and the hall, and you pay your tolls, with what’s in my bank I’ll have
enough to get a model of the King George V.

Direct confrontation was the only way to disabuse Robby of the
notion that we would really pay his tolls. I began by charging him a
quarter for a glass of soda (the commercial rate at MIT). His strenuous
objections were exacerbated when he found the evening meal would cost
him 3 dollars. When he countered that the price was too high, so he
and Miriam would ‘make their own,’ I announced the 1 dollar refriger-
ator opening fee and my 50 cent kitchen entry toll. Robby accepted,
albeit with little grace, the collapse of his scheme. Miriam persisted
for days thereafter making tickets charging me 99 cents for opening
the refrigerator (if you can charge me a dollar, I can charge you
99 cents).

Relevance
These notes document the spontaneous generation and working
out of a small project at home with no grown up intervention. 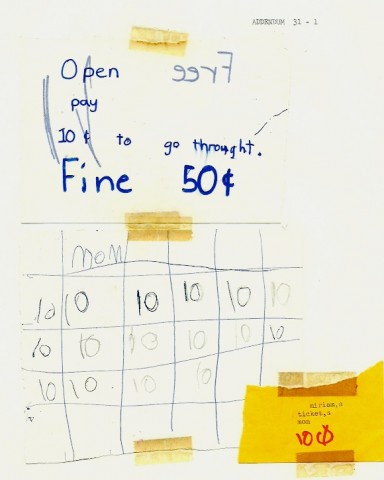