Riding home after this morning’s session (Logo Session 38) Miriam
said she thought the work was boring today. When I asked why, she said,
“Oh, I don’t know.” I have to look otherwheres for an explanation.

Today I tried to exhibit for Miriam the relation between closed
polygons and in-going spirals sufficiently regular to be judged ‘mazes’
rather than ‘pretty pictures.’ (Cf. Addenda 1 and 2). Yesterday Miriam
suggested for today that she would like to try to get more good numbers
for making mazes. I believe she had in mind a result like that of Logo
Session 27 (where we made a list of the members found with the ANGLE
procedure for making ‘pretty pictures.’) I made such a result our ob-
jective, but Miriam showed little interest in the work.

Note that Miriam was feeling sick this morning before we came to
MIT and also during the session. She ws disinclined to come in today
but agreed when I pointed out that we would be away from the lab for
the next 2 weeks. It may be that this was just a ‘bad day’ for her,
but I incline to believe I’ve been pushing her too hard in one direction .
(Turtle Geometry variable separation).

After we finished trying to find good mazes, Miriam began drawing
at my desk. She asked, “Hey, Daddy, how much is 14 and 14?” “Let’s
ask Logo,” I replied and keyed the expression. This captured her
interest. “I want to do some numbers.” Miriam keyed addends of about
20 digits each. Logo produced an answer in floating point format.
Miriam said, “That’s funny. It’s got a dot in it. That can’t be right.
I guess Logo doesn’t add very good.”

After Miriam complained about the session on the way home, I asked
the children what we could do to make the sessions better. Robby said
the day would have been OK if the printer worked, if we had been able
to make pictures out of designs. Miriam said she would just rather do
some adding instead.

Relevance
This vignette discusses the circumstances surrounding a Logo
Session Miriam found boring. I suspect I’ve been pushing her too
hard. Though the conclusion is uncertain, I feel it’s appropriate
to go easy for a while.

Miriam decided to take off the next 2 days, so we did not go into
the lab again until the 15th of July.

My files no longer contain this figure, if they ever did.
I suppose it was intended to show the collection of the
regular polygons (triangle, square, pentagon, etc.) to be
followed by Addendum 44-2 below, as an example of a “maze.” 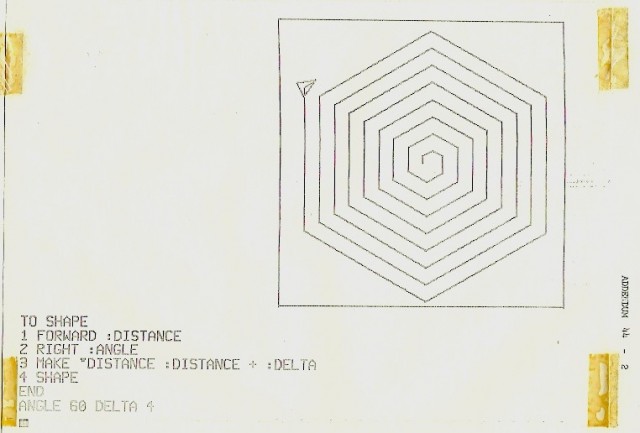