This material shows Miriam accepting instruction at corner opening play through a process of “turning the tables” on me after my exemplary victory. (The data were transcribed as Home Session 15.) A corner opening in tic-tac-toe is the strategy of choice, since its use nearly guarantees victory for the player moving first. Nonetheless, because it is possible to lose through failing to recognize opportunities or through one tie-forcing response by the second player, the power of the corner opening is not excessively obvious.

At the beginning of our play I introduced to Miriam as an extension of “ways to win” the notion of “chances to win.” You have a “chance to win” when you have only a single marker in a particular line and there is no blocking marker. The first game, wherein Miriam moved first, was a tie of the center-opening/corner-response sort. It was during the execution of this game that the “chances to win” terminology was introduced. At the beginning of game 2, I proposed teaching Miriam a good trick. Since the gambit begins with a corner opening, Miriam believed and asserted that she already knew it. She is aware of at least three corner-opening games:

The A game represents Miriam’s good trick, and B and C represent ways of blocking A which she can’t circumvent. In the games that follow where my move is first, Miriam attempted 3 different responses to my corner opening. In the other games, she “turns the tables” on me by using my play as a model to defeat me in turn.

Miriam makes move A at my direction and after my move 3, recognizes not only that I have 2 ways to win but also that A has no chances and B 2 chances to win.

Miriam here follows my advice to “turn the tables” on me by employing the same good trick (move 2 after response A to opening 1). During her role switch in applying this strategy, Miriam also switched from using X symbols as markers (which she had done in game 2) to literally copying the numbers I had used in that game (cf. games 2 and 3 in Addendum 61 – 1).

Miriam moves first (out of turn) at my request to confront the challenge of turning the tables despite my choosing the corner response opposite to that of game 3. I asked her opinion:

Bob Is moving here [upper right corner] the same or different from moving there [lower left corner]?
Miriam Different.
Bob Can you play the same game even though I’ve moved in the opposite corner.
Miriam I think I can.

As we continue, Miriam comments, “I’m playing the same trick on you.” Miriam again uses numbers for her markers but disguises the copying by using numbers (9, 6, 5, 10) different from those I had used in game 2. After commenting that move 2 was a forced move as is move C, I emphasize that what is most important to see is that the single move C converts 2 chances to win into 2 ways to win.

I warn Miriam after move 1 that I will probably beat her. She believes she can frustrate my plan by making move A (notice in the typical and familiar game B the outcome was a tie).

Bob In game 5 I am probably going to beat you —
Miriam Yeah.
Bob If you move where I tell you the first time, and after that —
Miriam I might not move where you tell me [laughing, she moves A; I had wanted her to move to the middle of the right column].
Bob Do you think I can beat you after that move?
Miriam Yeah [Miriam has not seen this game before, to my knowledge].
Bob I can. I will show you how.

After Miriam made her forced move B, I described my deciding where to move in terms of where I had chances to win and looking for a move where 2 chances to win come together. This game is one where selecting a usually valuable move (the center square) is not the optimal strategy.

Bob I can’t win this way [the 1 – 2 line is blocked by B]. I have a chance to win this way [in the row from number 1]. Do I have another chance anywhere? . . . Yes, I have a chance from 2 up through the center. And I have a chance along the top. So if I put my number 3 where the two chances come together, what do I get?
Miriam Two ways to win?
Bob That’s right, sweety.

Miriam turns the tables on me successfully. The symbols she used in the actual game show her slipping over into direct copying of my previous game.

Although I wanted her to go first (for another variation on game 6), Miriam insisted that I go first because it was my turn. After Miriam’s response A to the corner opening I proceeded, describing my reasoning at each step.

At this point Miriam confided to me that she would try to get Robby to move where she had placed her A, then she would make another move and try this trick on him.

I attempted to review with Miriam all the possible responses to corner openings, but she was tired and inattentive, and the session ended.

Relevance
This vignette describes my introducing to Miriam the idea of “chances to win,” seeing the forking move as placing a marker where chances to win intersect. The method was that of her “turning the tables” on me, i. e. using a tactic I showed as effective against me. 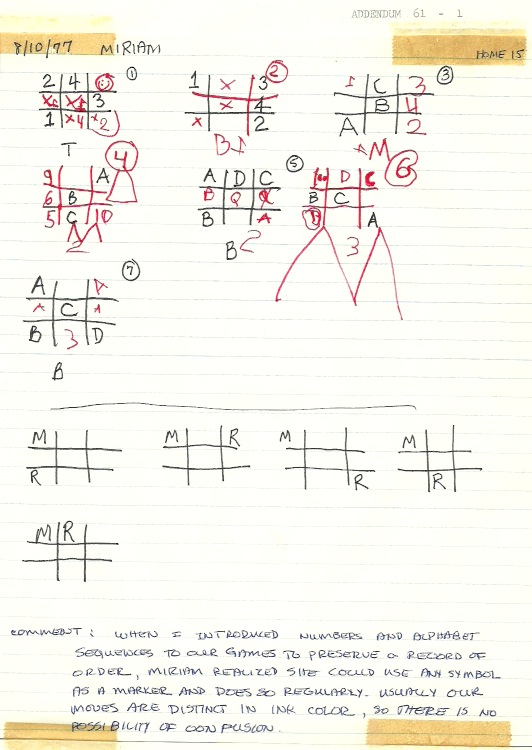