At the end of the day’s work (Logo Session 56), when the recording
equipment was packed away for the trip home, I was preparing material
for tomorrow’s session. Robby had been using procedures where DELTA
named a variable increment applied to a linear distance and today was
introduced to a use of DELTA as an angle increment. I had written a
POLYSPI analogue procedure (call it “A”; examine its listing on Addendum
75 – 1) and was showing it to Gretchen. (An execution of “A” creates
1 of the s-shaped curves in the picture of the addendum.)

Miriam entered my office and asked, “What’s that, Daddy?” I told
her it was a SEAHORSE and tried to distract her attention. This is work
I intend to pursue with Miriam in the near future, and did not want to
expose it to her early. Miriam was most insistent; she wanted to do
SEAHORSE. I would not tell her how to spell it. She spelled ‘SEA’
then got Robby’s help in spelling ‘HORSE.’ When Logo complained that
no one had told it how to SEAHORSE, Miriam complained to me. I relented
and wrote this procedure:

Miriam cleared the screen and was delighted when SEAHORSE executed
to create the figure she expected. She called Robby, executed it a
second time. He remarked, “It looks like you’re making something.”
“I am,” declared Miriam. “A flower.” She proceeded through another 7
executions and happily printed her flower in triplicate — with copies
for Robby and me.

Relevance
This vignette documents Miriam’s engagement in a small project
(which won’t appear in the Logo Session recordings), her attraction by
something not-quite-familiar, her elaboration of the artifact of the
procedure through repetition, and her fitting in the developing design
to a class of objects she is accustomed to. (To Miriam, the ‘flowers’
of drawing or design include any shape of manifest circular symmetry).

Miriam was sufficiently pleased with her SEAHORSE/FLOWER to send
copies to her great-grandmother (G.G.) and to her friend Maria (who has
moved to Spain). To the latter’s copy she appended a hand-written note:
‘I made this on the computer’. 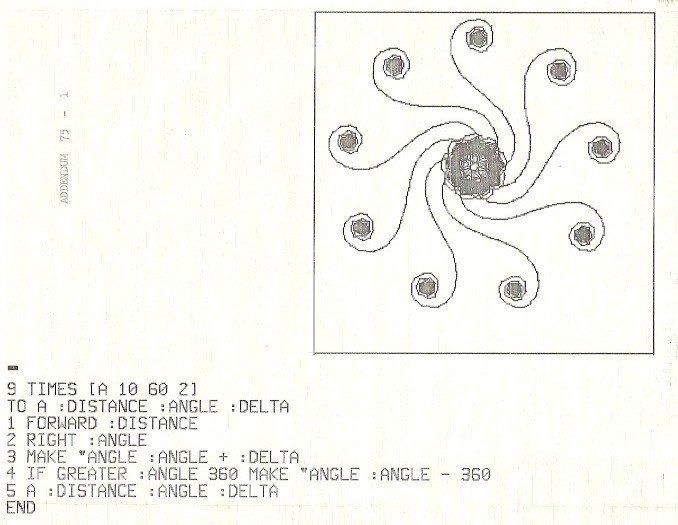