Today, the children’s first day of school, was a tough one for me. The combination of a late arrival at Logo and logistics problems put our work under an unusual time pressure. Miriam was tired (and later said she wished she had taken a nap) and didn’t pursue with enthusiasm her exploration of good numbers for the SEAHORSE (an INSPI procedure). Thus, she yielded up the remainder of her time when I was reluctant to let her have a break. Robby, in his turn started off in what was a normal fashion for him, but soon we ran into a problem, the extent of his reactions to which I still can not fathom. The session with Robby was dreadful, the worst so far since our project began. He was confused, began crying, but refused to stop our session; his allergy caused stuffy nose made his crying dreadful. His reasons for sorrow increased when he began lamenting the time lost which he could have spent making designs,,,, Affairs finally reached such an impasse, we just gave up on the day.

After a few minutes alone, trying to regroup my scattered aims for the day, I carried the video camera into the storage room and saw Glenn (a graduate student) doing paper folding games with the children in the foyer of our lab. Because Glenn enjoys playing with the children and is good at it, seeing them together made me uneasy. Twice through chance, through the availability of materials, and through enjoying games to which I have heightened Miriam’s sensitivity, he has performed before me, in effect, experiments I was developing (confer Vignettes 8 and 77). When I saw peeping out from under a pile for other papers they were folding, the sheet I in Addendum 86-1, I realized my five month long, complete collection of data on Miriam’s development in Tic Tac Toe was in jeopardy.

I asked Glenn to try to reconstruct the move patterns of the games they had played. His notes are on the 3×5 card shown in Addendum 86-1.

Glenn remarked on Miriam’s telling him, after her move B, that should he move in either of the other corners, she would win. He did not move there.

Miriam and I have not played this game to the best of my recall. Note that had Miriam moved in a space adjacent to A, this diagonal configuration would have permitted the opening to gain two ways to win, thus:

Glenn’s only dependable recollection of this game is that Miriam opened at the corner. The tie must have followed one of these patterns of a symmetric variation:

The data of Vignettes 71 and 85 argue that game A was most likely the one played (I believe Miriam would have beaten him had Glenn responded to her opening with B or C.

Glenn notes that Miriam requested he place his marl at the location of 1. Recall Miriam’s comment (at the time of game 7 in Vignette 61) that she would attempt to get Robby to make such a move so that she could play her newly learned tactic on him. When I asked Miriam, while discussing the game with Glenn, how he had beat her, she was a little apologetic, saying, “Well, gee, Daddy, you can’t win all the time. I guess I must have made a mistake.” She speculated further (at least agreed to my suggestion) that she missed a forced move. As game 5 shows, Miriam learned well how with a corner opening she could defeat an opponent responding with a far, mid-row move. This particular game suggests that she had not yet accommodated her configuration based view of the game to the relative advantage obtaining to the opening player. (Notice her foiling this same opening of Glenn’s in game 6 by abandoning the corner move.)

Glenn seemed a little surprised at my suggestion that Miriam ‘knew what she was doing’ (i.e. executed a game-length strategy) as she beat him here. When asked her opinion of Glenn as a player, Miriam allowed that he was pretty good. Glenn acknowledged that Miriam did make all forced moves.. . and showed a surprising inclination to adopt the corner opening.

This game is notable in showing how quickly Miriam abandons the losing strategy of game 4. I believe this is the third game she has played with a mid-row (non-center) opening.

Relevance
This vignette raises two issues. First, how does Miriam apply in other situations what she has learned n the structured sessions of this project? Second, how complete can these data really be? It is clear from game 4 that when the knowledge is directly applicable (as in playing Tic Tac Toe with a new opponent), Miriam applies that knowledge directly in a minimally modified form. (She hopers to catch a “naive” opponent with her preceptor’s “dirty trick.”) Learning anew, at her cost, that a significant attribute was not marked in her formulation (its success depending on the corner opening move), Miriam when confronting the same opening a second time retreated to a seize-the-center play (this reduces maximally the opening player’s chances to win).

How complete can these data be? If it be the case that Miriam interacting with one person on the occasions described here and in Vignettes 8 and 77, engages in three significant ventures in learning, must it not also be true that other such incidents occurred which have escaped my notice? I think not. The extent of time I spend with the children and the sensitivity to precisely this sort of influence argue that not much has been missed. 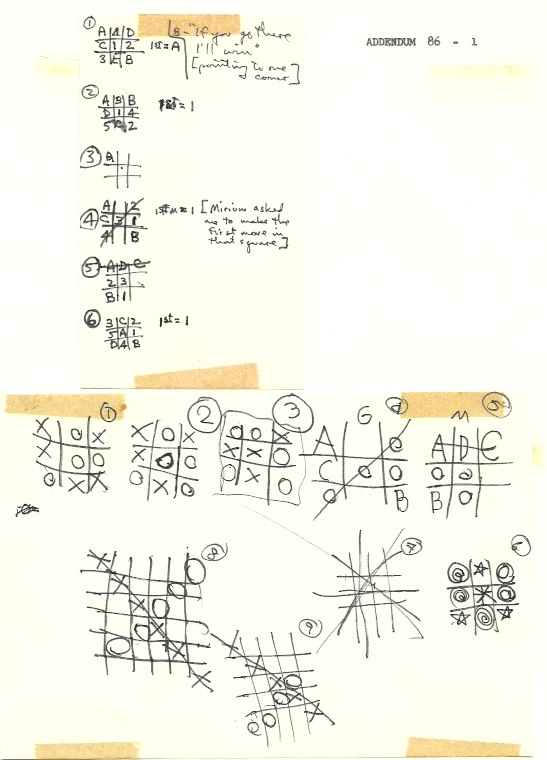