4/3 Miriam noticed a sum in Home Session 7 as I worked on a paper
and asked if she could do it. When I wrote the sum on the black board,
Miriam added right to left with carries, thus:

However, before I wrote down the problem, I had asked Miriam to do so,
saying the first addend 3 thousand 7 hundred 41. Miriam wrote:

then complained that she had run out of room on the black board.

After Miriam had a snack, I called her back to a cleared
chalkboard and asked her to write this number — 7443, and then 2322.
Miriam wrote both in the standard form. When I asked why she had earlier
written 3741 differently, she replied, “To get you confused.”

Relevance
Miriam’s peculiar notation for 3741 shows the upsurgence of an
obsolete representation. It is not surprising that it surfaces in a
task where Miriam must produce the representation rather than merely
manipulate it (cf. Vignette 29, Making Puzzles). I interpret her final
remark as a sign that she is becoming increasingly defensive about her
thinking. (It is also, of course, an excuse for her embarrassing confusion.)

This second problem confirms as robust, both in execution and
against challenge, Miriam’s application of the standard algorithm for
vertical form addition in the cyclic notation. Miriam has “learned to
add” in the common sense, as well as in her own, less common ways.

To verify that Miriam would not be confused by cascading carries
as she was in the past (Cf. Home Session 8), I left upon my chalkboard the
sum 248,443,575 plus 531,576,428 (Cf. problem 2 of Addendum 130 – 1).
Miriam expected me to bargain with her over doing the problem. Whenever
she inquired, I told her not to do it — rather she should play outside on
this sunny afternoon. Later, she came determinedly up to my chalkboard:
“I’m going to do that problem.” She proceeded right to left, taking the
cascading carries in stride. Miriam did not recall the result of 4 plus 7, [but]
achieved the correct column result through finger counting. When she
finished, I asked her if she could read the result. She could not. Her
best attempt was 7 million 8 hundred 2 thousand and 3 (Had there not been
so many zeroes in the result she would have given up completely). Miriam
knew that her reading of the result was not standard. 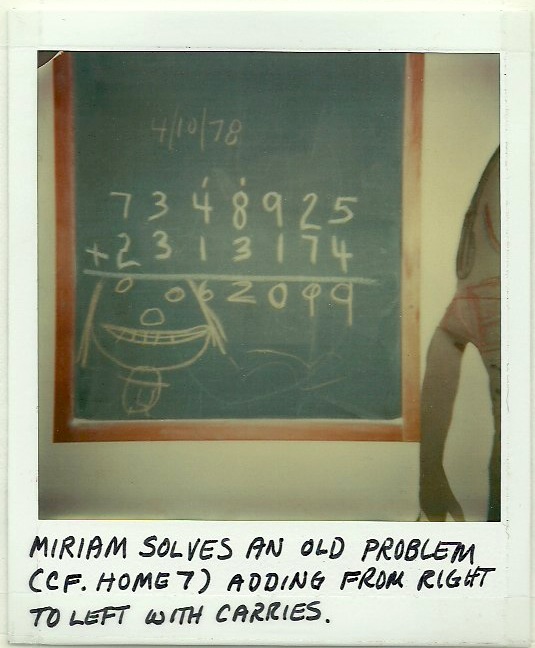 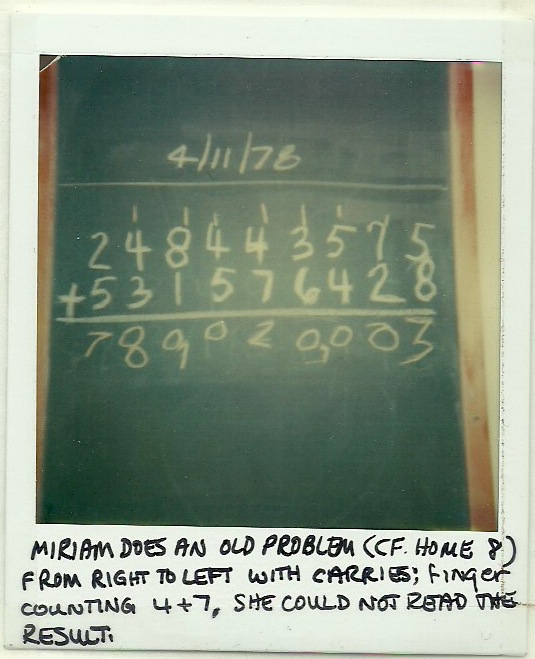