4/8/ Miriam began planning her birthday party several weeks ago.
On the 3 x 5 cards of Addendum 131 – 1, she listed the friends to bo
invited, the candy, and her selection of party games. The children were
all from her class at school. The games are all familiar, the first
being a party standard, the second played at Meg’s party, and the third
one of Miriam’s favorites from gym. (She also spoke of playing Red Rover
outside and was much concerned that Brian and Miceal should be on opposing
teams.) Miriam thought of getting cards for invitations, but did not.
Thus at the last minute we had to make our own. Miriam liked the idea
of preparing invitations at Logo, so we made a special trip there and
used the letter-writing procedures and her pretty flower to create her
unique invitations (cf. Addendum 131 – 2). Yesterday morning was dedi-
cated to preparing the house. We pushed the furniture out of the living
are of the loft to make a big play area, nonetheless praying for sun
shine so that we would not have 12 active kids confined in our small
apartment on a rainy afternoon.

A week of allergy-driven fitful sleep left Miriam physically
depressed but cheerful on her party day. She donned the party dress made
by her great-grandmother and played in the courtyard waiting for guests.
As they arrived, Robby helped first by carrying in presents and then by
playing soccer with the boys. At the one point where all the guests had
arrived and were inside, I spoke above the pandemonium to announce that
we would have an ice cream cake about 3 o’clock but that otherwise they
should enjoy themselves in whatever way they chose. The children gathered
about while presents were being opened. . . and then began a problem. An
early-opened gift was a set of face paints, which appealed to everyone, and
some children went off to the bathroom and decorated themselves. Somehow
two girls ended up fighting in the hallway, pulling hair and crying. At
this pass, Robby led the boys off to the tree fort and either Dara or
Lizzie suggested playing on the space trolley out back. I joined that
group of girls for fear they might get too close to our land lord’s
horses. Miriam and two friends stayed inside with Gretchen. From the
space trolley landing, the girls could see the boys across the lawn and
made an assault on the tree fort. That short-lived battle was ended by
my recalling the children for the party meal.

The children sat in a circle on the floor, and Miriam asked if
Peggy could join them. Everyone sang ‘Happy Birthday’, had his soda and
goodies, and after a quick clean up played in the courtyard until parents
started arriving.

Miriam was disgruntled, mainly because her face-paint crayons
had been used against her will and some got broken. She was also disap-
pointed that no one played the games she had picked out. (We discussed
later whether I should have directed them to, and Miriam opined that I
was right in not taking over). Miriam cheered up a little when I gave
her my present, a small string art design in the shape of a heart (which
she had requested) with a large letter ‘M’ in the middle, and when she
chose the evening’s dinner (pizza).

4/9/ This birthday began on a cheerful note. Since I had neglected
to give Miriam her weekly allowance on Saturday, the normal day, and
because it is calculated as a dime for each year of her age, on this day her
allowance was 70¢, where yesterday it would have been 60¢. This joke,
heightened by my feigned aggravation, delighted Miriam.

After a good night’s sleep, Miriam was considerably more chipper
than yesterday and eagerly accepted my suggestion that we should go riding
the trolley cars of Boston. She, Robby, and I took the Riverside line to
the terminus. The conductor, finding the kids and I were out for a ride,
would take no money, so we enjoyed a free ride both ways as we headed
down into the city. At Park Street we took the red line to Quincy,
stayed on board when the train reversed directions, and emerged at
Harvard Square. After a late lunch at Brigham’s we returned home by
the red line and the Commonwealth Avenue trolley for a quiet afternoon
and a small party this evening for the 5 of our family. 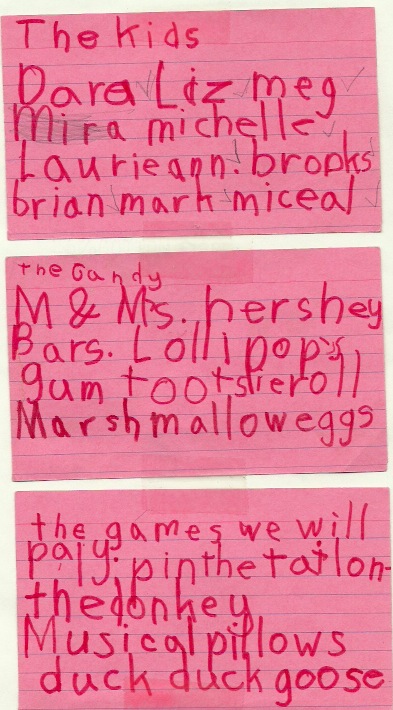 Party Invitations Made at Logo 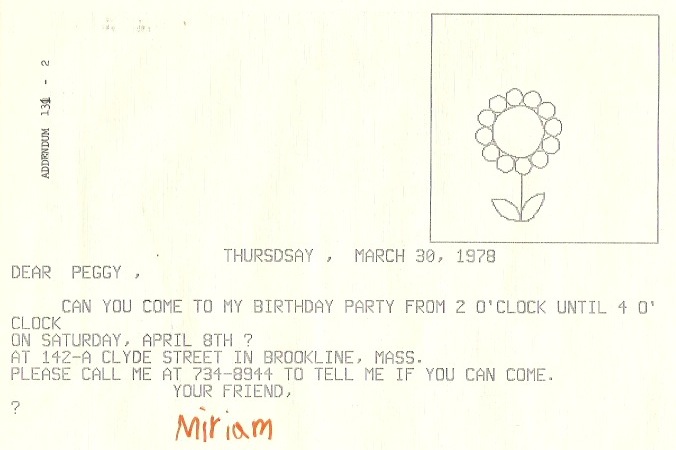