4/28 The calorie counting continues for me, and the adding for
Miriam. The sum of Addendum 133 – 1 is interesting because of its error:
the left justification of 3 and 4 digit addends in the same vertical grid.
Despite this mal-arrangement, with its implication that the place-value
basis of column alignment has not been mastered, Miriam’s carrying
procedure was standard.

5/8 When the children started squabbling over whose turn it was to
add up my daily calorie count, I refused either the privilege. But today
Miriam took up the task with no complaint from Robby so I let her proceed.
She wrote the addends and result thus:

Most interesting was her procedure. Beginning at the left, Miriam cal-
culated 14 for the column and carried a 10 to the next right column. I
intervened, “Miriam, don’t you remember your good trick for when you
have carries?” She restarted on the right and reached a standard result.

5/31 After staying up late last night at a dinner with Mimi Sinclair
and Marvin and Gloria (whereat Miriam showed off a little by working with
the soma cubes and the 7-piece pythagorean puzzle), Miriam stayed home
from school today. During the course of the day, I posed the following
problem, designed to contrast for her results of mental addition and
vertical form addition to point up the question of place value in the
vertical form.

When Miriam saw the horizontal sum, a sheet of paper covered the question
and sums below the dotted line. She knew the result was 20 and after she
had written down the answer I took away the covering sheet. Miriam read
the question, then mused, “For both, the numbers are eleven.” Puzzled,
I asked what she meant, but Miriam continued without responding to add the
left sum from the left to 65. She stepped back, then with a “No. That’s
not it.” returned to the chalk board to erase her result. I stopped her
erasure and directed her to the second sum, which she added to 20 (from
the right, with only mental marking of the carry), then encircled. When
I asked how she knew the right sum was correct, Miriam argued that the
answer was 20.

Relevance
These three incidents all focus on the imperfections of
Miriam’s place value comprehension. The last I expect to be seminal,
leading Miriam to recognize that the results of addition, in whatever
form, should be consonant, and that she can herself judge the correctness
of small vertical sums by checking through mental computation. 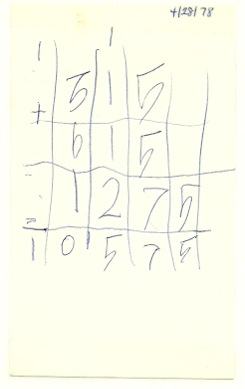