The synergy between hypertext tools for organizing large, heterogeneous
databases and functioning models as explanations of processes may permit us to
address a class of problems remaining largely bypassed and undervalued in the
study of human learning. If these “power tools for the mind” permit us better
to manage and model complexity, they may bring within our grasp a series of
problems long considered beyond the reach of well articulated understanding.
One such cluster of problems centers on how cognitive development of the
individual relates to particular interactions. Case study has long been an
effective tool in unravelling the more intricate patterns of human behavior and
development. Its focus on individual behavior leads to the detailed
observations necessary to understand an individual’s performance. As
contrasted with methods which attempt to “hold all else equal,” case study
traces in detail the path of change, and so it is the method of choice in
studying learning. Technology has enhanced the dependability of case study
materials: videotape permits capture of enough of a context to permit later
interpretation in detail. This blessing is a burden in disguise, for there is
no balanced development of techniques of analysis. Computers can facilitate
the analysis of case material to redress that imbalance. One may hope their
use will introduce a new period in the study of intelligence, one where
cognitive scientists will have at last the tools to study the development of
knowledge in its full particularity.

An Example of a Case Study Corpus

Since significant learning appears from processes which are extended in
time, its understanding depends upon a multitude of interactions between what
is in the individual’s mind and the accidents of everyday experience. This
stance has led me to study and record the cognitive development of one of my
daughters from the time she was 18 weeks old through the sixth year of her
life. The targeted theme of this study is the interrelationship, if any,
between the development of language skills and knowledge and spatial knowledge.
Every week we have videotaped experiments and our play together; we
supplemented those mechanical records with extensive naturalistic observation.
The total number of tapes comprising the corpus is 240 (each containing,
typically, three experimental sessions). For the first three years, the
experiments divide into sets with two different foci. The first is a
continuing series about Peggy’s developing object knowledge; this material
relates to literature of the Piagetian paradigm and is intended as a
calibrating spine of the study. The second set of experiments is more a
miscellany, each one drawing its inspiration from what my wife or I could
notice as most potentially fecund in the child’s behavior. Some incidents of
the naturalistic observations are striking in themselves, such as the child’s
climbing up to a tea table — when she had not yet walked — and pushing it
across the floor, walking behind it. Other observations were driven by
quasi-regular reflection, and they tend to focus around my theoretical
concerns, such as the interplay of language production and other dimensions of
development.

Using Hypertext to Cope with an Extensive Corpus

The information captured in so rich a medium as videotape is beyond all
hope of transcribing completely in any serial symbolic form, such as text based
protocols. Any theory which initially selects the material to be transcribed
must be a preliminary, imperfect theory — but its selection criteria will
screen out possibly critical information. We can begin, however, with partial
transcriptions and use the file updating capability of computer based storage
to extend the transcribed corpus at need. Call this strategy variable depth
transcription. The researcher records what he imagines as relevant, with such
pointers to source material as to make its deepening at need a matter of
course. As his analysis leads to improved theory, that theory will suggest the
need for deeper analysis of parts of the corpus and their more extended
transcription. The extended database will then suggest enhancements of the
theory. A positive feedback loop is established. Hypertext facilities now
existing and under development permit such an approach. They need to be
applied to two problems: recording important details and their interconnections
in on line databases; and developing functioning models of cognitive structures
and their changes, based on the empirical material of the corpus. These are
the objectives of the CASE project. 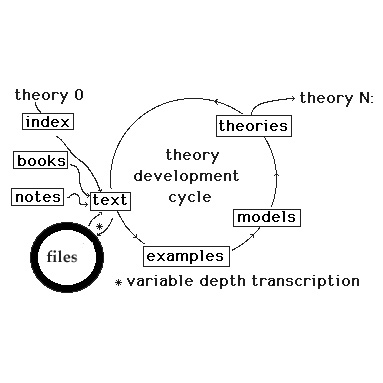 Index: A bi-directional index of text files contents; this is a
list of themes and purposes, on the one hand, and a list of activities and
results on the other.
Text: By episodes with scenes: for scenes, a summary description; for
episodes, a summary description with variable depth transcription of action and
dialog.
Examples: Related behaviors: for each discriminated behavior, the file
will contain an architypical example with its “link-set” — pointers to all
other located relevant occurrences (in the literature as well as in the
specific study; the purpose is to provide a minimally abstract of the
exemplified behaviors.
Models: Speculative, ascribed functional schemata/: these are to be the
minimal models necessary to function over the set of related examples; the file
will indicate model sequences and correspondences with other models in the
file.
Theories: Theories of model development: the possibilities this file
presents are: describing the minimal changes necessary to cover examples of
significant development; the possibility of holding in different states of
development alternate theories relating to the corpus; further, to the extent
that the models and theories can be made functional, it will be possible to
engage in regression testing of theory changes by applying them over the set of
models and examples.

Progress to date with the CASE project has been extensive but limited in kind.
The original objective of this research was to explore the use of hypertext
systems as a tool for advancing the analysis and modelling of detailed case
studies. The conceptual focus was two-fold, on developing a database and
psychological analyses, and on exploring the utility of hypertext for tasks
involving the administration of complex bodies of information and even the
development of and interconnection of functional models with them. Such remain
the long term objectives of the research. In practice, to date the effort has
focussed on establishing the overall structure into which the case material
will be fit over time. Significant segments of the corpus of naturalistic
observations have been entered into the online database. We have followed this
procedure: