Advice to a Teacher

I write out of my own experience and about that experience, but my situation has been different from yours. You’ve had to worry about instructing twenty or thirty children. I have merely had to play with two children — and those children were my own and I knew them well. I write here also with the conviction that your work in the future will be more like my experiences than it has been. Computers will permit the construction of intellectual worlds where children will be able to spend much time learning effectively on their own. This will give you more time to know the individual children and to intervene in their learning as the adviser you, their parents, and the children themselves hope you will be.

Geometry was an important central theme of instruction in our laboratory at the MIT Logo project because its founder invented a kind of geometry called "turtle geometry." It is distinguished from others by being a geometry of action. The leading actor is "the turtle." Either a mechanical robot or a triangular cursor on a video display screen, the turtle goes forward some distance or turns through some angle on command.If its pen is down, the turtle draws a line. When my children were six and eight, I introduced them to SHOOT, a simple turtle geometry game.

A setup procedure drew a target and placed the turtle at some random screen location. To score, the children had to turn the turtle right or left some angle to point it at the target, then SHOOT forward some distance into the target. The game was easy for them to play and they enjoyed it. (They even played the game without the computer; setting a hula hoop on the floor for a target, the children took turns playing turtle and keyboard commander.)

Robby, the older child, came to want a more complicated game. He was fascinated by the air battles of World War II and asked me to make a game where the targets would be airplanes. READY-AIM-FIRE (we called it R.A.F.) satisfied him; even more, it engaged him. Robby spent the better part of an entire day trying to score more kills than Von Richthofen, the famous Red Baron of World War I. This game permitted him to do what he wanted — play in his own fantasy world. It permitted me to introduce him to Cartesian coordinates. 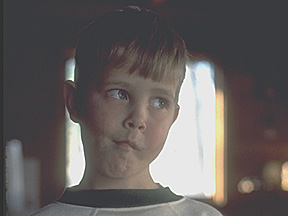 Robby, during our research at Logo

The style of instruction presented in this story is opportunistic in the extreme. It depends on three things: the initiative of the child to connect his computer activities with what he knows about other things that concern him; the flexibility of computer systems to enable the building of simple models; the knowledge and values of a teacher in shaping particular procedures through which the child’s objectives are achieved in such a way that the child is introduced to important ways of looking at and describing the world.