Is playing with computers good for children? Couldn’t it be bad? Might they not begin to think of themselves and others as machines? Here is a story about how my daughter, Miriam, pretended to be a machine — the Logo turtle — and what she made of that.

This night is the last night of summer, so defined by the children’s having to be in school on the morrow. Over the summer they have gradually become accustomed to going to bed late, and now, in order to rise early, they should go to bed early. No one found this argument convincing. We negotiated a compromise that the children get into pajamas, return for dessert (delayed by conversation with dinner guests, Jose and Fernando), and then go off to bed. Robby lived up to the agreement; Miriam would not. 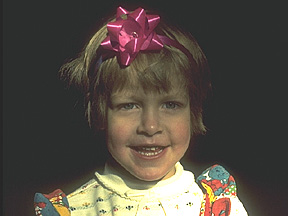 When given a direct order to go to bed, she went to my bed instead of hers. I had mentioned during dinner the children’s inclination to play turtle. Fernando tried to help. " Miriam, FORWARD." She did nothing. I advised him that he had omitted the carriage return. Upon his "carriagereturn" Miriam complained, "You haven’t told me how far to go", chuckled, and popped back onto my bed. Gretchen attempted "FORWARD100, carriage return." With the gripe "You haven’t told me how to FD100" still in the air, I described this bug as the well known space omission between command and input. Fernando was then precise: "Miriam:FORWARD, space, 100, carriage return." Miriam played fair and proceeded stepwise (counting each step) down the length of the loft. At first, we expected 100 steps to be too few. Miriam counted "70" in the kitchen and at "88" gleefully announced "Out of bounds" as she walked into the wall in the hallway. While so close to her bed room, she picked up her ‘security blanket’ (the air was chilly) and came skipping back into the living area.

The game wore on (hide turtle under the blanket, and so forth), after a while became wearing, and I directed her to bed with the threat of physical force. Miriam replied, as she has for some months now, with the counter-threat"I’m quitting your research, Daddy, I really am." Having thus preserved her dignity, she acquiesced to the demand that she go to bed.
In this incident and many others, Miriam showed that this robot-role which she was willing to adopt was one she subjected utterly to her ends as a person. Playing turtle was an enrichment of her repertoire, not a constraint upon it. As we paraphrase William Blake:


Tools were made; born were hands.
Every child understands.
Publication notes: 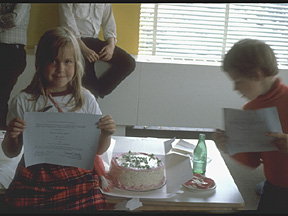 Miriam (and Rob in motion), at a Logo party celebrating completion of my doctoral program. Miriam did not “quit my research” as she threatened, but often asked what she would get out of it. When once she proposed that Seymour should bring her a “Little Professor” calculator from Texas Instruments, I suggested that it would be better for her to be a little professor than to have one. Marvin and Seymour agreed to declare Rob and Miriam “Little Professors of the AI lab,” an honor earned by their working so long in my Logo projects. Greg Gagarian prepared the certificates with my text which runs this way: