This has been a rainy, midsummer day with both children at home in
an acoustically live house. Having slept ill last night, under pressure
of the noise and our common confinement, I went to bed early. When the
children failed to fall silent instantly, I “yelled” at them, i.e. I
told them quite specifically that I had suffered too much of their noise
and commotion, that I needed sleep and they must be quiet.

Because of the rainy day bedlam, I had failed during most of the
day to make headway in my thinking about Miriam’s computations and my
understanding thereof. As I drifted into sleep, some imperfectly
remembered lyric from my early school days entered my mind:

No greater fragment remains of that song, but I imagined that situation
and the woman conducting that song, and then another:

This ditty carried me along to a better feeling, one wherein I was
capable of feeling ashamed of my ill behavior to the children and happy
that our relationship was one where I could apologize to them and they
be capable of accepting that apology.

I called Robby. He entered my bedroom quietly and was obviously
relieved when I told him I was feeling better and was sorry I had been
so crabby. He asked if I would help him with a problem. When I agreed,
Miriam entered and pounced on me. (This was easy since my ‘bed’ was a
sleeping bag on the floor.) Robby returned with the book Curious George
Rides a Bike. Both children had been attempting to make paper boats
following the instructions on pp. 17-18 (Cf. Addendum 51 – 1, 2). Robby
was stalled at step 5 and Miriam at step 3 of this 10-step procedure.

Both children were working with small (tablet size) pieces of paper.
I was sleepy and unfamiliar with the procedure, so instead of looking
at their problems, I first made a boat myself. A nearby newspaper pro-
vided paper of size large enough to escape folding-small-pieces-of-paper
bugs. When I reached step 3, Miriam noted that as the locus of her
impediment. When I asked, “Oh, you’ve got a bug there, sweety?” she
responded, “Yes. An I-don’t-know-what-to-do-next bug.” I slipped my
thumbs inside the paper and pulling at the side centers, brought the
ends together. Miriam said, “Oh, I get it now,” and continued with her
folding. (She had not been able to identify that transformation, failing
most likely to interpret the arrows and -ING STAR, that portion of the
newspaper masthead still visible after the folding as a clue.)

When Miriam some time later attempted step 7 (bringing the ends together
a second time), her construct disassembled. After I suggested she
hadn’t tucked in the corners carefully, Miriam described it as a ‘no-
tuck-in bug.’

In the transformation from step 9 to 10, because the central crease
must suffer a perpendicular crease in the opposite sense, one usually
has trouble pulling down the ends without the assembly’s failing. When
both children had made several boats, I asked Miriam what bugs she had
uncovered. She cited the original two and a third, the ‘last-pull-apart
bug.’

The construction expanded. The newspaper pieces made battleships
(and stopping half-way, hats). Miriam made life boats and Robby, by
unfolding a newsprint page before beginning the folding procedure, made
a large, flimsy craft he dubbed an aircraft carrier. It was a small
step to carrier war in the Pacific (my bed as Pearl Harbor) and the
pillow fight which ended this war.

Relevance
These observations show Miriam using the word ‘bug’ to describe
the difficulties she encounters in executing a complex procedure, both
with some direction and more nearly spontaneously. 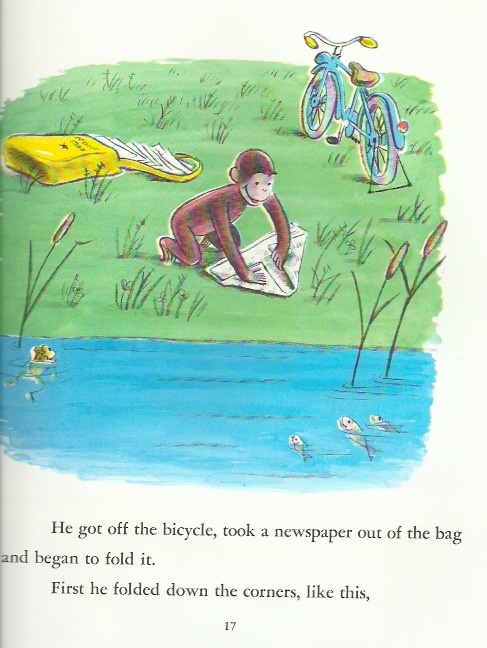 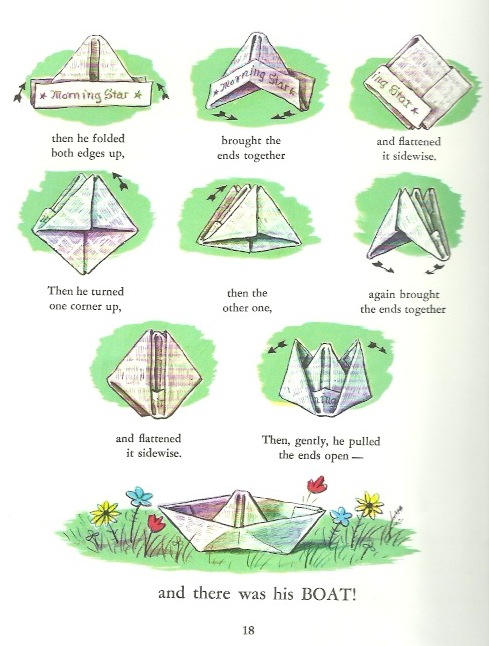