Rob gave his mother and me many reasons to be proud of him throughout his academic career, despite school attendance that was fragmented and ofttimes disrupted by travels and changes of location.

After participating in pre-school playgroups and the North Guilford Nursery School, Rob attended Kindergarten and early grades in the Guilford Lakes School, then began taking time off to come to MIT with me. Home Schooling for several years (undertaken with advice from John Holt and friends on the local School Board) was followed by studies at the Ecole Active BiLingue, JM (in Paris), another year in Guilford Schools, and with High School years in Belmont, MA. He did well enough to earn admission to the National Honor Society and graduate as a Commonwealth Scholar, though as teachers of his early years noted he was sometimes inclined to day-dream in class. (I can testify personally that he comes honestly by that weakness, if such it be.) Further details of his studies are beyond the scope of this archive.

While he was in high-school, I was convinced he would do well at MIT one night where we both attended a talk (see the e-notice below) after which he asked intelligent questions and discussed technical issues with the main speaker of the evening, Jerome Wiesner. He has had unique opportunities and made good use of them. 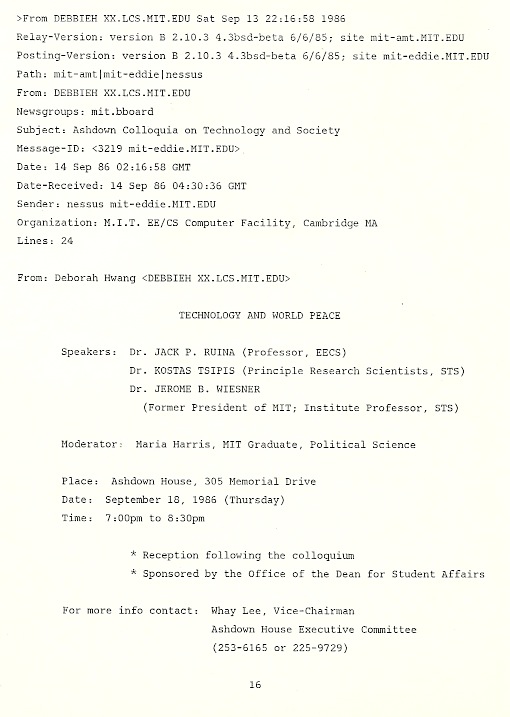