As we have attempted reducing Miriam’s cortisone dosage, she has
again begun wheezing severely. Her problem was especially unfortunate
today, for she had asked a friend to come visit. Lizzie is an energetic
red-haired colleen of 6. At lunch she disclosed to Miriam and Robby all
the problems they could expect with a younger sibling. (Her sister
Katie, at 14 months, not only keeps her awake but also tackles Lizzie
every time she strolls by). The weather was so bad no one could play
outside. Miriam, hoping for some relief in the better air of the Logo
lab, agreed to Robby’s suggestion that we all go over there to play.

Once at Logo, Miriam showed Lizzie around — through the Learning
Lab, the Music Room; the toilets out here and the coke machine across
the hall. Lizzie said she wanted a picture of a flower and then explained:
earlier in the year Miriam had made copies of the image made
by a FLOWER procedure and took one for each member of her kindergarten
class; the children colored them and some took them home. Miriam was
still feeling low, so I helped Lizzie get what she wanted. First, a
FLOWER picture. Next, looking at Miriam’s work hung on the walls of my
office, she declared she wanted a copy of PF (for PRETTYFLOWER). As we
waited for her picture to come from the printer, Lizzie saw a 6-fold
near triangular polyspiral which Robby had printed from a different
terminal. “Wow! I want one of those. Show me how to do it.”

I started the SHAPES (or MPOLY) procedure. Miriam showed some signs
of improvement and the two girls worked together creating designs which
they would color in later (cf. Addenda 103 – 1 and 103 – 2). Whenever
they got in trouble, I was available to help them get started again.
This play of making computer designs, then printing pictures of them for
later coloring, occupied both girls for about two hours. Both girls
made some very pretty novel designs. For example, the design of Addendum
103 – 2 was one I had never seen before and judge pretty (more so
with the drawing in light on the cathode ray tube). When Robby and I
tried to show SHOOT to Lizzie, she could not get interested in it and
returned to MPOLY.

As the day wore on, Miriam’s apparent improvement faded. We drove
home by way of a playground on St. Paul Street. (Miriam and I stayed
in the car while Robby and Lizzie ran around). As we continued on to
her home, Lizzie revealed that her daddy had a computer too where he
worked, but ours sure was different from his.

Relevance
These notes record the children’s continuing engagement at Logo
though our project be over, and provide a glimpse of the reaction of
one of Miriam’s peers.

Six-fold MPOLY with a person in the middle 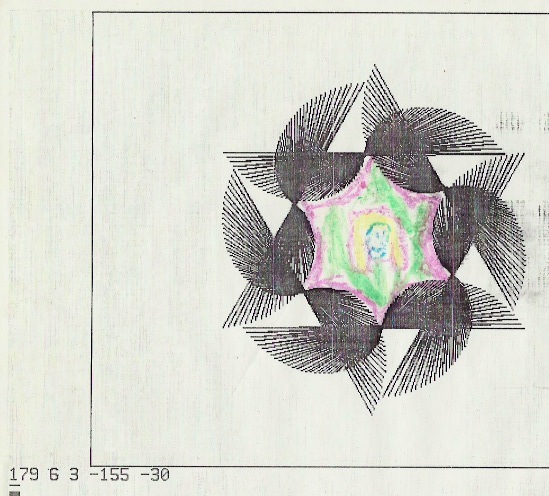