A large portion of Miriam’s drawings during the past year have
taken the form of presents she makes to others. She has spoken of them
as presents many times. One formal element of these notes reflects
that character. Each typically bears a tag of the form: “TO _______/
LOVE, MIRIAM” (see Addendum 1 for an example). Her initial tags were
of the form: “TO ________/FROM MIRIAM,” reflecting, I believe, the
format of tags she read on presents received at Christmas and so forth.
Their great-grandmother sends both children postcards whenever she goes
on trips with a valediction “Love, G.G.”

The note presented in Addenda 1 and 2 is to a fellow of Miriam’s
play group. Brian is a boy whose entire family is committed to foot-
ball, so it’s most appropriate that Emberley’s ‘Football Fred’ face
(page 11) should be a present for him. The face inside is ‘Sleeping
Simone’ (page 7). Because the note lay on her desk for several days,
I had the opportunity to ask Miriam how she came to draw such a nice
picture. She replied that she copied Football Fred’s face but made
the body up herself. The shoulders of that body come from Football
Fred’s face. The ‘bar’ arms, ‘stick’ legs, and circular body are
typical of her earlier drawing. The striped shirt is the costume of
a rugby player ( a very popular shirt style now, which is also found
in Emberley’s book on page 28).

Relevance
The note/present Miriam made for her friend Brian shows in
high contrast the appearance of sophistication which she is
developing from copying faces in conjunction with the quite
primitive body-drawing she invented herself. 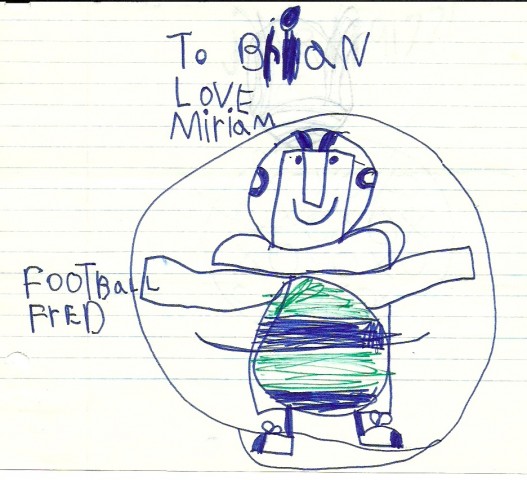 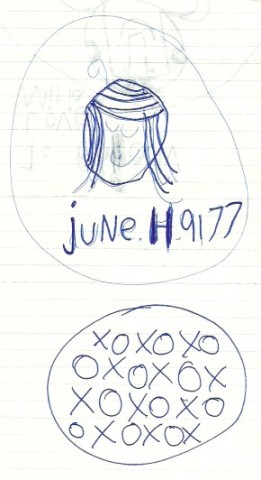