Miriam approached me holding up a flat, cross-shaped piece of card-
board about 13 inches long, marked as below, with this challenge: “Daddy,
you’ll never guess what this is.” 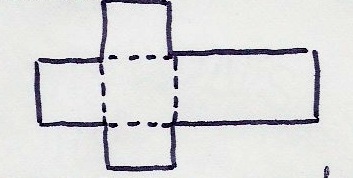 I gambled: “An airplane?” “No,” Miriam chuckled, “it’s a box, for a
Valentine’s day present for you and Mommy.” Miriam showed me how to
bend it to create a cubical cardboard box. When I praised her new creation,
she explained the way it came about. Then and later, in response to
questions of mine she told this story.

Miriam needed a box for a Valentine’s day present. This requirement
came first. Then, in her words:

In the flotsam of the play area, I found a piece of cardboard with a figure on each side. One side shows the figure above Miriam describes as her plan. She explicitly denies that she ever intended to make so small a box. The other side appears as Addendum 120 – 1. This was her first attempt to draw the outline for a potential box. The box she finally made is of larger size, the 13″ length first shown.
I reconstruct Miriam’s procedure for making the box as follows. She first concluded she needed a box, then, guided by the Tic Tac Toe grid, she imagined a solution to her problem. Miriam worked out the plan shown in the top figure and produced the unsatisfactory pattern of Addendum 120 – 1. She then selected a piece of material of size comparable to the Tic Tac Toe board, the inner half of a box she had been saving for another purpose (it had been tentatively assigned as the body of a cardboard elephant to be made when Miriam should collect enough cylindrical rolls) 10″ square and 3″ high. Miriam ripped down one side of the box and drew her pattern on the box bottom.

Miriam cut out her pattern, showed it to me, and demonstrated how she had made a cubical box by folding along the dotted lines and the bottom-side crease. The size of the cube sides, of a magnitude comparable to the squares of her Tic Tac Toe frame, was determined by the piece of material Miriam found conformable to her imagined objective.

Relevance
This vignette is a cameo of Miriam’s problem solving in her own world of objectives and materials. She was happy with her product and the act of imagination implicit in seeing its pattern two ways, as a “raw material” and as an object creatable from the material. (Her challenge to me was that I could only see it one way, or only as a nexus of pretense, i.e. as representing some other object.)
Also noteworthy is her comfortable use of “interior dialogue” as a convention for communicating her thought processes and her admission that it was a fabrication. Her final use of the box two days later to hold a wedding present shows her commitment of the material to her
original objective was slight. I infer that the objective’s import is as an occasion for the working out of an idea. 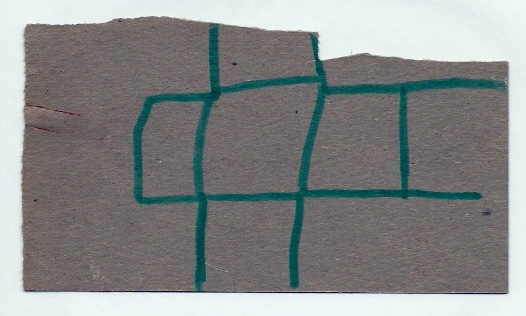