3/13 Recently, in response to his studying multiplication at school,
Robby has asked me several times to “test” him on times problems —
i.e. listen while he recites in series a set of products of one digit
with the numbers 1 through 12. I have helped him but also objected that
one never really encounters problems of that sort — one always multiplies
one random digit by another. When asked to set these problems
for him, I offered instead to modify the addition program ADD.WHAT
Miriam formerly used, to pose multiplication problems. Robby said he
would like that.

By changing two expressions, I made ADD.WHAT into TIMES.WHAT —
but that proved too cumbersome a name so it’s now shortened to T. As
Robby executed T (doing problems such as 5 times 7, gleefully triumphant
when T proposed 0 times 6), Miriam, who sat at the next terminal,
asked to use the same program.

The first problem she encountered was 5 x 7. I expected her to
5-count 7 times under finger control. Instead, Miriam asked to borrow
my pen and have some paper, whereon she wrote:

Miriam reached the intermediate result 28 (by adding 14 plus 14) but
encountered difficulty with the last 7. Robby told her the result was
35, but she didn’t accept his interference. Eventually she worked out
35 herself (it may have been by counting up, but I am not certain).
The next problem was 3 times 8. Despite my injunction, Robby told
Miriam the result was 24. She did not accept his answer and proposed,
herself, 38 as the result even after stating that two 8’s were 16.

3/15 While I was out of the room, I left my notebook of computation
transcriptions open to page 3 of Arithmetic from Miriam at 6. Upon
returning, I found Miriam reading the book. She then asked my per-
mission, and I said there was no reason not to. At supper this evening,
Miriam asked to play the game “I know a number that’s bigger than yours”
as described on page 3 of Arithmetic. This reconstruction is accurate
in content though not a transcription:

3/22 Plus ça change plus c’est la meme chose. Miriam brought a friend,
Laurie Ann, to Logo today. Laurie decided to play with MPOLY (when she
finds a design she likes, Laurie prints the figure, then takes the
drawing home to color in.) Miriam refused to work with Laurie and asked
to use the ‘T’ procedure. The first problem posed to her was 7 times 9.
On the piece of scrap paper preserved here as Addendum 125 – 1, and
working by herself, Miriam “solved” the times problem by encoding it in
hash marks and counting. When the procedure refused to accept her
result of 66, Miriam complained. I remarked that her answer was close
but not perfect. She tried 67. “Colder.” Miriam continued with 65,
64, and finally 63.

Miriam’s next problem was 5 times 7. I went to work with Laurie.
Returning a little later, I saw Miriam keying numbers in sequence.
She had begun at 1 and was trying every number to find the product of
5 times 7. I was amazed and laughed, probably hurting Miriam’s feelings.
She stopped there, at 21.

This next morning, Miriam agrees she would like a TINY.T procedure,
one that would let her pick out the biggest number to be multiplied.
I promised to write such a procedure at our next visit to Logo.

Relevance
Most striking in Miriam’s use of T was her clear appreciation that
Robby was using a means of generating correct answers she did not grasp.
She did not immediately recognize that Robby was reciting well-known
results. Instead she cast about for a simple generative procedure which
produces a double-digit result from two single digits. Catenation was
her best speculation.

Six months ago, in Arithmetic Final, (Miriam at 6 and 1/2), Miriam
asserted that “infinity” was the biggest number of all (I believe she
heard this piece of impressive knowledge from another first grade
child). After reading the transcript, she came away with a different
point of view (but one not clearly spelled out there) — if one can
always add 1 to a number, can’t one always subtract 1 from a number?
This may be her best road to inventing the negative numbers.

Finally, I find Miriam’s return to the counting of hash marks the
ultimate witness on the centrality of counting in her worlds of
computation. It will be most interesting to see how her knowledge of
multiplication develops. 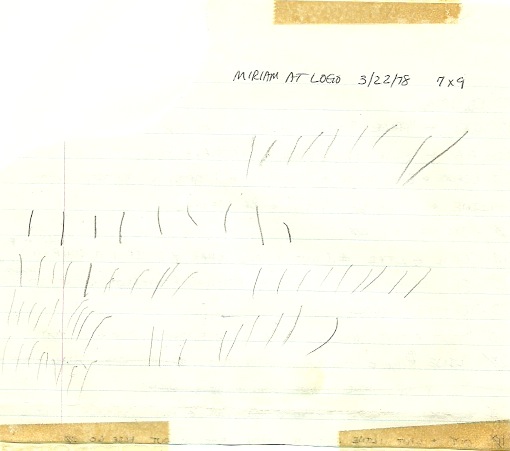